Review of The Vicar’s Wife
Sunday, February 2, 2014 by Cindy Sproles 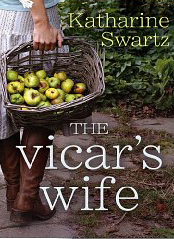 I must admit, I anticipated The Vicar’s Wife would be a long, heavy book to digest. But I was wrong. Nicely written and flawlessly tying two eras into one, Katharine Swartz drew me in and held tight.

In this story Jane Hatton, a true New Yorker, is uprooted with her children by her British husband and moved to his homeland. Trying to make the best of a situation she doesn’t want to be in, Jane finds an old folded scrap of paper in a food pantry written by Alice James, who not only lived in this home but married the vicar of Goswell.

Jane’s curiosity for the Vicar’s wife, her life and her dreams, leads her to search out the story of Alice James where she finds out she and Alice share a kindred spirit.

Uniquely written, by hopping from present day to past in the lives of these characters, Swarts carefully pulls off a book that, if written by most would have failed. She captures the separation of the characters, leads the reader through without confusion and plants a wonderfully told story that is enjoyable and relatable.

I enjoyed this book. Three cheers for Katharine Swartz.

I encourage you to read Katharine’s book, if for nothing more than to see the skill in how she intertwined two eras together.